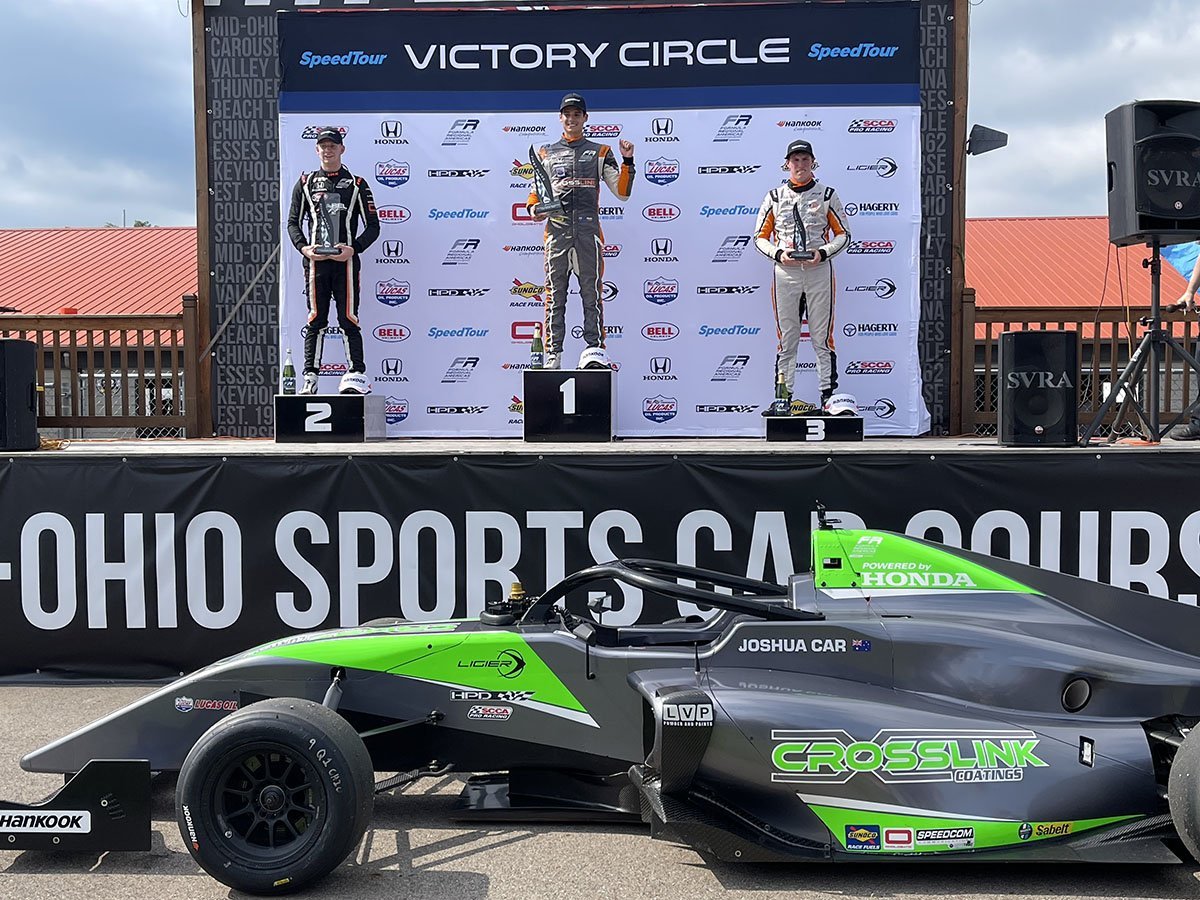 It was a winning weekend for Team Crosslink this past weekend at the Mid-Ohio Sports Car Course. 2019 F4 United States Champion Powered by Honda Champion Joshua Car earned a race win in the FR Americas program while Chase Gardner scored a pair of top-ten results, including a fifth-place finish in the third and final race on Sunday.

After rain washed out qualifying on Friday afternoon, the FR Americas grid was based by practice times in the one and only official session that was held earlier that morning. Joshua Car, courtesy of his pace in practice, earned the pole position while Dylan Tavella lined up fourth.

Car would take advantage of his pole position and jump out to the lead in the first wheel-to-wheel action on the weekend leading every circuit of the seventeen-lap race netting him another win on his resume and twenty-five points towards the championship. Tavella ran in the fourth position for the majority of the race before being forced to retire two laps from the end and eventually classified in the 13th position.

Returning to the track on Sunday and with the grid set on Saturday’s round seven fastest race lap, Car would line up near the pointy end of the grid in the third position while Tavella would look to make a drive forward from eleventh. Car was able to add his second podium result of the weekend with a second-place finish keeping his championship hopes alive en route to claiming the third fastest lap of the race. Tavella would have trouble early on to fall a lap behind the leaders before earning a 12th place finish.

In the final wheel-to-wheel action of the weekend it was Car that would seek the early advantage from his third place starting position as Tavella lined up on the outside of row three in sixth. Car quickly jumped to the lead on the opening lap before the caution would fly. Controlling the restart and maintaining his position at the point, Car suddenly slowed, retired and was classified in the twelfth position. Tavella, who went a lap down early as he was forced to pit due to contact, scored the fastest lap of the race by a massive margin on his way to an eleventh-place result.

In the F4 US Championship side of the program, Ryan Shehan would start round seven from P15 while Chase Gardner and Trevor Russell would slot in 25th and 27th respectively after the cancelled qualifying session. Gardner was able to drive through the field and score the best result for the Team Crosslink F4 trio with a solid eleventh place result as Shehan gained one position to cross the line in 14th. Trevor Russell was also able to advance up the running order gaining nine positions to finish 18th.

In the second wheel-to-wheel action of the weekend, it was Gardner who once again claimed the team’s best result, this time in the ninth position and adding points to his championship total. As one of the fastest drivers on the track and with times from race two setting the grid for race three, Gardner started the final race of the weekend in sixth. Ryan Shehan had another position gaining race moving forward from his seventeenth place starting position to near the top-ten before eventually being classified in thirteenth position when the checkered flag flew. Unfortunately, Trevor Russell was involved in an on-track incident and failed to finish.

In the final race on Sunday, it was Chase Gardner who secured his career best F4 Championship finish. Pacing with the leaders and drawing away from the rest of the field, Gardner scored a fifth-place result and a handful of points in the championship points chase. Shehan and Russell had a trying race finishing 23rd and 25th respectively.

The next event for Team Crosslink will be on their karting side of the program as their national level team will take on the United States Pro Kart Series event at Road America July 8-11. The next F4 Championship and FR Americas event will take place July 15-18 at the Brainerd International Raceway in Brainerd, Minnesota.