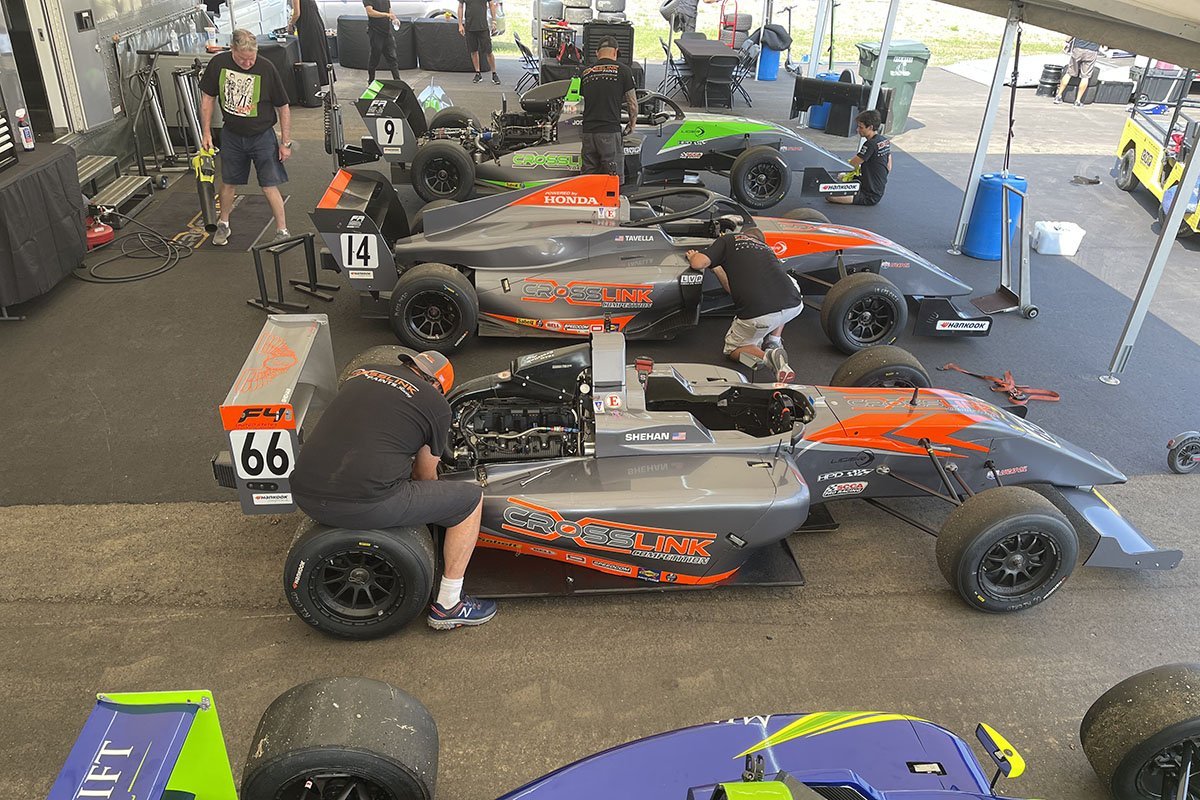 “Good weekend for the team,” explained Sean Owens. “The drivers that are expected to win won and the drivers that are learning continued to progress with great speed earning championship points. Congrats to Josh Car on another FR win and to Ryan Shehan for his best F4 weekend to date.”

Josh Car led the Team Crosslink FR duo has he emerged from Saturday’s qualifying session as the quickest driver and earned the pole position for round ten. Teammate and fellow Crosslink driver Dylan Tavella followed closely and narrowly missed out on the second position but slotted into P3 and would begin the first wheel-to-wheel action of the weekend from the inside of row two.

Car continued his front of the field presence but fell two positions during round ten, managing to salvage a podium result. Tavella had a good race but some issues early on relegated him down the running order as he rebounded to finish seventh. Unlike their F4 counterparts, the FR drivers only had one race on Saturday, but returned Sunday for a pair of wheel-to-wheel events.

Sunday proved to be victorious for Team Crosslink as Josh Car was able to take advantage of his pole position starting spot to drive to the race win. Scoring another win for the FR Americas side of their program, Car dominated to second wheel-to-wheel action of the weekend. Unfortunately, Tavella encountered an issue on lap seventeen and was forced to retire from the race classified in the eighth position.

Race three of the weekend was a carbon copy of race two for Car as he assumed the pole position when the lights went out and led lights to flag for his second win of the day. Leading every single lap on the day, Car is working hard to claw his way back into the championship battle. Tavella continued to have a day to forget as an 11th place result saw him finish outside the points paying positions despite having a lap time that classified him in the top-five in race pace.

On the F4 side of the Team Crosslink program, it was Chase Gardner and Ryan Shehan who would fly the team’s colors and logo as they looked to continue their recent success and further their development. Chase Gardner, who earned a top-five at the most recent round at the Mid-Ohio Sports Car Course, qualified in the 14th position while Ryan Shehan found himself back in 22nd after turning laps well inside the top-ten in practice.

The first F4 race of the weekend was a disaster to say the least. After an opening lap pile up that kept the field behind the pace car for quite some time, a second incident on the restart brought out another caution, and eventual red flag, ending the race due to time constraints. With less than two green flags laps completed, officials deemed that the race would not count towards championship points and drivers would start race two of the weekend from their original qualifying positions. As it stood on track, Shehan had gained eleven positions to run 11th while Gardner dropped four to 18th.

Race two for the F4 drivers started in a similar fashion as race one as an early caution slowed the field but after the restart, it was a much cleaner race. Both Gardner and Shehan managed to move forward with Gardner gaining three positions to finish just outside the top-ten in 11th while Shehan gained 13 to finish ninth, his career best in the F4 United States Championship Powered by Honda. Battling as high as seventh mid-race, Shehan had his best drive of the season and looked to carry that momentum into Sunday. Following the race, Gardner was handed a ten second time penalty that dropped him to 17th on the results sheet and forced to sit out round twelve.

Starting the third and final race of the weekend inside the top-ten, Shehan had to again take evasive action to avoid two separate on track incidents. Falling down the running order to 23rd, the Team Crosslink driver had another spirited drive towards the front advancing all the way to P10 before finishing twelfth.

Owens added, “We have a little time off now before our next outing. Was looking forward to a break but it is straight back into several weekends of karting events. No rest for the best!”