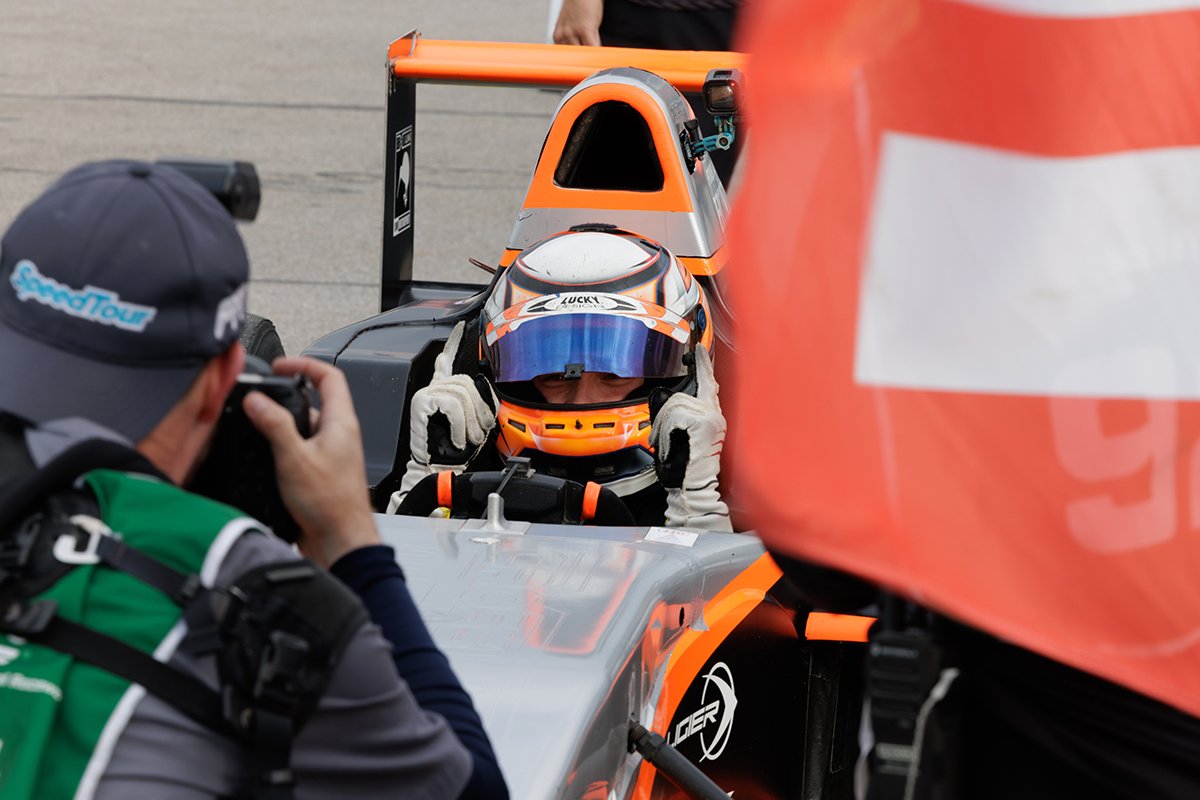 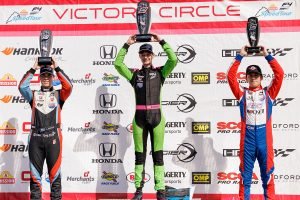 It was another winning and podium-filled weekend for Crosslink Kiwi Motorsport at the ultra-fast Virginia International Raceway (VIR). Taking on rounds 13 through 15 of the 18-race program, Ryan Shehan and Bryson Morris each won races in the F4 United States Championship Powered by Honda while Cooper Becklin, Ryan Yardley, and Dylan Tavella earned podium results in the FR Americas Championship.

It was a dominant F4 qualifying for the Crosslink Kiwi Motorsport program on Friday afternoon as not only did they lock out the front row, but they also secured the first three places on the grid to flex their muscles on the speed charts. Leading the way on the results sheets was championship hopeful Bryson Morris who managed to secure the elusive pole position while Ryan Shehan clocked the second-fastest time of the session to start race one on his outside. Gabriel Fonseca, who was the quickest driver in practice, slotted into the third position while Lucas Fecury and Maddie Aust would look to overcome some disappointing results when the wheel-to-wheel action began on Saturday morning.

On the FR side of the program, Ryan Yardley claimed the quartet’s best result as Crosslink Kiwi Motorsports put a pair of drivers in the top-five and all four in the top-ten. Yardley was able to just edge teammate Dylan Tavella for the fourth position with Tavella in fifth. Cooper Becklin was back with the Texas based program and secured the outside row four starting spot while Kevin Janzen aimed to move forward in race one after qualifying tenth. 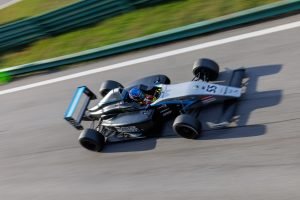 In the first F4 race of the weekend it was three Crosslink Kiwi Motorsport drivers in the top-four with two on the podium. Leading every circuit, the Crosslink Kiwi duo of Ryan Shehan and Bryson Morris swapped positions late in the race with Shehan earning his second win of the season followed closely by Morris. With the strong results, Morris inched closer to the championship point lead as Shehan moved his way to P3 in the point standings. Gabriel Fonseca ran third early in the race but fell one position after the caution period and was never able to make it back. Crossing the line fourth, it was one of his best results of the season and would build momentum for the rest of the weekend. It was a tough race for Fecury and Aust as both drivers failed to complete a lap and were classified in 18th and 19th respectively.

Set for 30 minutes but shortened to 25 minutes due to a delay in the schedule, the Crosslink Kiwi Motorsport FR Americas drivers took the green flag aiming for podium results. Tavella, pushing hard early, had an off at the Oak Tree corner that sent him down the running order. Forced to push hard for the rest of the race, the championship contender was able to drive his way back toward the front to finish fourth. Taking advantage of some other drivers’ misfortunes and showing great pace, Ryan Yardley was able to put the Crosslink Kiwi Motorsport name on the podium in third, just ahead of Tavella. Cooper Becklin put three team drivers in the top-six with a solid sixth-place result improving two positions from his qualifying effort while Kevin Janzen was back in the points with a tenth-place result. Following the race, a time penalty issued to a fellow competitor for an on-track penalty moved Yardley to the second step of the podium and Tavella to third. Additionally, Cooper Becklin moved to fifth putting three Crosslink Kiwi Motorsport drivers in the top-five in the results. 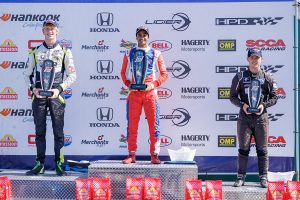 Race two for the quintet of Crosslink Kiwi Motorsport drivers saw another win, a pair of top-five results and three drivers once again in the top-ten. Claiming the checkered flag and maximum race points, Bryson Morris topped the podium blocks once again and took over the F4 United States Powered by Honda Championship point lead. Race one winner Shehan ran in P2 for most of the race before ending his day with a fourth-place effort. Looking to make a move on the final lap, a premature checkered flag was flown a lap earlier than expected due to a car that was stuck in the tire barrier which would have caused a yellow. Halting any further progress forward, Shehan was disappointed not to be able to complete the last lap which could have resulted in a one-two finish for the team. Lucas Fecury slotted himself in the ninth position to earn his second point-scoring result of the weekend while Maddie Aust and Gabriel Fonseca finished 12th and 13th respectively. Fonseca also secured the fastest lap in race two resulting in the race three pole position for the final race of the weekend.

Tavella led the way for Crosslink Kiwi Motorsport in race two on the weekend with a podium result and 15 points toward his title chase. In a race that featured a major battle with drivers second through fifth, Tavella was able to hold his own and cross the line in the third position. Cooper Becklin and Ryan Yardley finished just outside the top-five in sixth and seventh while Kevin Janzen finished 11th on the results sheets. 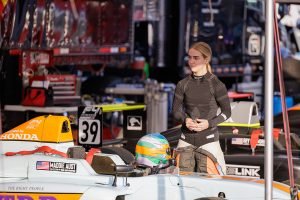 It would be a challenging race three for championship hopefuls Morris and Shehan, as incidents relegated them down the running order. Shehan would be involved in opening lap contact that forced him to the pit lane and eventually to retire while Morris would battle hard at the front of the field before slippery conditions caused him to spin and out of the points. The door was opened for Lucas Fecury and he took full advantage driving his way forward to an impressive fifth-place result. Morris was classified in 14th while Gabriel Fonseca and Maddie Aust were also forced to retire due to contact after Fonseca started from the inside of the front row.

While F4 drivers had their issues in race three, FR Americas drivers were able to drive forward as two Crosslink Kiwi Motorsport drivers stood on the podium in second and third. Cooper Becklin led the team in race three to finish second as well as score the fastest lap of the race as he finished just ahead of Ryan Yardley in a Crosslink Kiwi Motorsport double podium. Kevin Janzen took full advantage of some other drivers’ misfortunes to earn his best result of the season in seventh while Dylan Tavella had a disappointing race three to be classified in tenth. 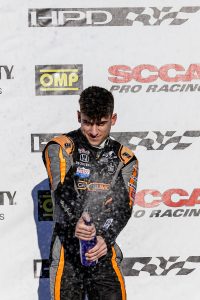 Next stop for Crosslink Kiwi Motorsport will be their home event at Circuit of the Americas in November.